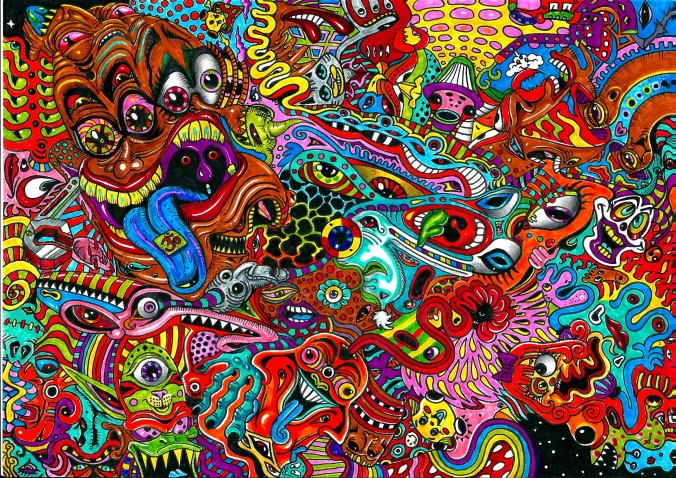 I wrote this today when I should have been working.  Written on the 29th May 2017.

While out running down by the pond one day, Algernon suddenly tripped over a rock and tumbled head first into another dimension.

Occasionally (as in supremely occasionally, like, barely ever at all), things like this do happen. It’s got something to do with the ether. Or maybe it’s magic? Actually, no one really knows. Once it even happened to a duck, but that’s another story for another time in another dimension altogether, so let’s not dwell on it.

Poor Algernon had left the plane of reality he had known since he was a boy and now found himself to be quite discombobulated, rearranged and exceptionally baffled in an altogether new psychedelia entirely. It was quite disconcerting, to say the least.

He was now somewhere between thirty and thirty three thousand feet tall, and stretched as thin as a human hair. His new surroundings consisted of colours so loud and flavoursome that they couldn’t even handle themselves and instead burst into showers of foaming mushroom things before they had a chance to properly exist at all. It took some getting used to. So much getting used to, in fact, that Algernon didn’t get used to it at all.

Algernon ate a piece of mushroom. He didn’t want to, nor had he physically made the effort to do so. The shroom had simply become one with the inside of his mouth. After he’d not chewed it – yet had at the very same time – his teeth uprooted themselves and ran off into the exploding mushroom void and became distant stars that screamed a lot from afar.

In his understandable confusion, Algernon had forgotten to become scared and so, in the dawning realisation that he must feel something, lest existence itself become pointless, he resorted to radiating sheer, unaccountable and very much misplaced elation. In this brand new world however, elation existed solely in liquid form.

His leaking excretions made the broken slivers of exploded mushroom laugh at him. This upset Algernon greatly, and so he took it upon himself to begin smashing them with his gigantic fists.

Having all-new physiological anomalies for fists that were now wafer-thin and ridiculously sharp meant that rather than punch the mushrooms, he diced the little things up something rotten instead. And oh how they squealed when he did. The enamel stars, watching from afar were greatly upset by what they witnessed and howled so loud that they disintegrated and left the world a little less toothy.

Soon, Algernon had wiped out most of the laughing, screaming mushrooms and had left nothing but a floating carpet of grey pizza toppings and one singular mushroom with a decidedly terrified vibration emanating from it. The pitiful shroom looked beseechingly, in about as much as a mushroom that used to be a colour could, and hoped to appeal to the vast and murderous sliver of wrath’s better nature. But alas, it was not to be. Algernon was the Destroyer, the Cleaver of Worlds, he was the Ragnarök of the loud colour dimension and as he cut the last mushroom down with a mighty slash, the concept of colour ceased to be altogether.

In the next instant, Algernon landed face first in a muddy puddle beside the pond.